The booming meal kit segment of the food industry — the global market is estimated to hit $11.6 billion by 2022 — is leading to a crowded landscape. Gobble, a meal-prep service founded in 2010, distinguishes itself by focusing on delivering family-friendly meals that can be cooked in just 15 minutes.

Gobble applies its Sprout algorithm to the weekly menu curation and recommendation process, which evolves each member’s menu based on personal taste preferences learned over time. “What’s exciting about this AI application, in particular, is that we have the culinary expertise of our chefs as a ‘teacher’ guiding the AI in building your ‘personal chef,’” founder and CEO Ooshma Garg said. The result: “an expert machine learning algorithm that will understand you, [and] your expressed and revealed preferences, and tap into trends from the wider community to introduce you to a combination of both nostalgic and new recipes in an increasingly relevant way,” Garg said. 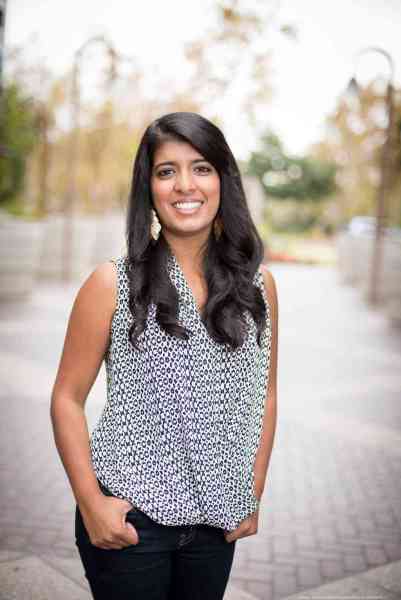 Above: Ooshma Garg, founder and CEO of Gobble.

New members begin by specifying their protein and diet preferences, along with their preferred nights per week and household size. From that moment onwards, every member interaction — including menu browsing, menu adjustments, additions of sides, and recipe review modules — helps Gobble develop an individual taste profile.

Gobble sends a weekly survey to members asking what they would like to see on upcoming menus and requesting members rate dishes “hot or not” against each other. “Member engagement with questionnaires and reviews on Gobble is high as it directly influences their experience and menu the following week,” Garg said. Gobble’s recommendation algorithm also assesses similarities between new and existing members, albeit initially with limited data, to ensure a new member’s first few weeks based on their location, diet, and protein preferences are as appealing as possible.

Gobble also uses AI to plan ahead with greater acuity. The proprietary Fenix algorithm studies Gobble’s sales data from the last 7+ years, alongside external open data sets such as weather history and industry trends. With these data sets, the algorithm projects two key outputs: which members will place an order in any given week, and the distribution of sales among all dishes on the Gobble menu. “Multiple external variables intersect to affect week-to-week sales,” Garg pointed out, “anything from a snowstorm in a certain region to seasonal holiday behavior.”

Fenix fits various models to the data and disentangles the component parts of historical member behavior to make sales predictions as accurate as possible for future weeks.

The recommender model for food

As many players in the field have seen, food recommendations do not abide by a simple formula. “There are actually a number of critical aspects to conquering this challenge,” Garg said.

“We’ve all tried a dish that a friend ordered and loved it, even though we never would’ve thought to order it ourselves. So we are faced with several psychological ‘food blocks’ and, at times conflicting, food desires from every member. How do we suggest a dish so that it is comforting, but not boring? Adventurous, but not too risky? Then how do we ensure that the meal is actually enjoyed as much as the member expected?” Garg said.

“Another interesting consideration is that while we have so many insights to potentially gather, we have a much smaller window to gather them,” Garg said. “Netflix can show you trailer after trailer, and their algorithms will get immediate gratification — a thumbs up or a thumbs down. A Gobble box of dinner kits is a much larger commitment, of both time and money, and a negative experience is much worse than simply watching a trailer for a movie you don’t like.”

Food recommendations also deal with a longer timeline — consumers are fickle. “Maybe something you ordered from Gobble sounded good at the time, but when it comes to dinnertime the following week, maybe you’re no longer in the mood. It means we have to be that much more intelligent and effective in our recommendations before we show them to you,” Garg said. “These nuances are why we have invested so heavily in developing our own technologies. Nothing off-the-shelf has cracked the code in the food space to date.”

Gobble has begun experimenting with AI to help ensure that meals look and sound as appetizing as possible. “This is something AI can do with far greater accuracy than any one person or one-off survey,” Garg said. “Gobble employs a ResNet based computer vision model and NLP vector embeddings to see if we can predict how appealing a given photo, title, or meal description is to our members. We pair this with an iterative and A/B testing approach to dish copy and creative, showing unique combinations to different member groups across the country to capture further learnings — much like Netflix’s approach to displaying different cover art in various placements.”

Beyond what customers may like to order for any given week, Gobble learns about each member as a person and can apply those learnings across all services. “We know discoverability exists on a spectrum; there is always a balance of promoting newness and expanding members’ comfort zones, while still providing familiar meals members will recognize and love again,” Garg said.

It’s a similar challenge to Spotify’s “Discover Weekly” offerings, which are AI-crafted playlists that attempt to concoct the perfect mixture of your recent favorites, nostalgic hits, and a few tracks you’ve yet to discover. Gobble believes it can accomplish the same level of trust at dinnertime.

Gobble’s AI approach demands more creativity from the team in how they gather data while ensuring members don’t get bogged down by too many surveys or questions. “We also know and accept that any learnings and algorithmic changes stemming from our recommendation data can have significant ramifications across our entire supply chain, from forecasting to prepped food to delivering the box to your door,” Garg said.

Gobble’s end goal is to achieve an “auto-pilot” service for dinnertime. “Just like you probably leave a Spotify-curated playlist running while you commute, work, or exercise, Gobble can take care of your meals each week with increasing relevancy and minimal input from the user,” Garg said. “It’s a win-win; as our members enjoy reduced stress and less involvement in their menu planning, Gobble streamlines operations even further, experiencing less variability, greater predictability, and enhanced efficiency across the business.”