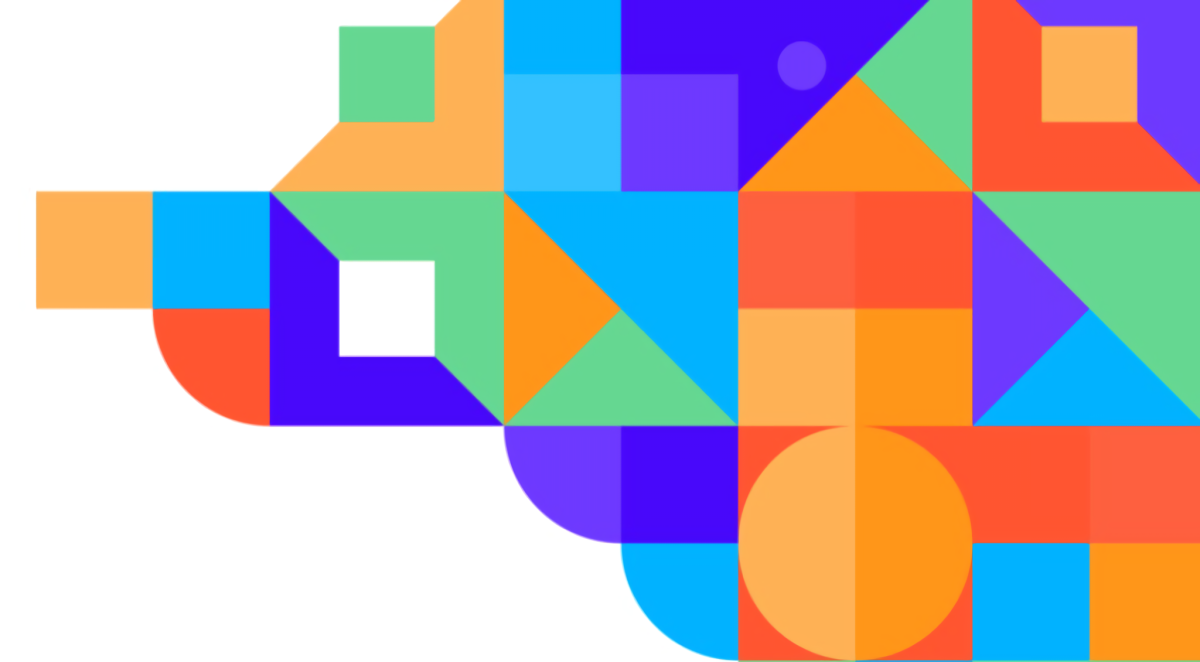 You.com, which bills itself as the world’s first open search engine, today announced its public beta launch along with $20 million in funding led by Salesforce CEO Marc Benioff with participation from Breyer Capital, Sound Ventures, Day One Ventures, and others. The company says that the funds, will be put toward user growth, product, and technology as You.com scales its platform to new users on the public web.

“I had the original idea [for You.com] eight and a half years ago,” Socher told VentureBeat via email. “Today, there’s too much information, and no one has time to read it, process it, or know what to trust. [A] single gatekeeper controls the vast majority of the search market, dictating what you see: too many advertisements and a flood of search-engine-optimized pages … On top of that, 65% of search queries end without a click on another site, which means traffic stays within the Google ecosystem.”

Above: Searching for a product on You.com.

Founded in 2020 by Socher and Bryan McCann, You.com leverages natural language processing (NLP) — a form of AI — to understand search queries, rank the results, and semantically parse the queries into different languages, including programming languages. The platform summarizes results from across the web and is extensible with built-in search apps so that users can complete tasks without leaving the results page.

“The first page of Google can only be modified by paying for advertisements, which is both annoying to users and costly for companies. Our new platform will enable companies to contribute their most useful actual content to that first page, and — if users like it — they can take an action right then and there,” Socher continued. “Most companies and partners will prefer this new interface to people’s digital lives over the old status quo of Google.”

Socher previously founded MetaMind, an AI startup that raised more than $8 million in venture capital before it was acquired by Salesforce in 2016. He was part of the team that won first place in the 2007 semantic robot vision challenge and was instrumental in creating ImageNet, a publicly available database of annotated images used to test, train, and validate object-recognizing AI models.

Socher — who was until recently the chief scientist at Salesforce, where he helped to build the company’s sprawling Einstein AI platform — has long been attracted to the field of NLP. His Ph.D. dissertation at Stanford demonstrated that deep learning, which is loosely modeled on neurons in the human brain, could solve several NLP tasks simultaneously — eliminating the need to develop multiple models.

As for McCann, he led natural language processing teams at Salesforce as a research scientist in AI.

“Without cutting-edge deep learning, we would have never been able to leapfrog many years of work in [the area of NLP],” Socher said. “I believe search is the most important application of AI and especially NLP today. [And with You.com,] the user can control the AI through personalization and customization.”

On You.com, sources like Reddit, Quora, Stack Overflow, and Medium are searchable with a single query. For example, programmers can search for code snippets and get a summary generated by You.com’s AI.

“Choose your favorite sources for news, social, shopping, and more. You’ll see results from the sources you trust first,” You.com’s website explains. “Get news, check GitHub, compose a tweet [all] in one place.”

Socher also argues that You.com “raises the bar” for privacy, offering the choice of a “zero trace” incognito mode. The currently-ad-free platform doesn’t sell personal information nor track users around the internet. And while it hasn’t ruled out introducing ads, You.com has publicly committed to never offering “targeted privacy-invading” ads. 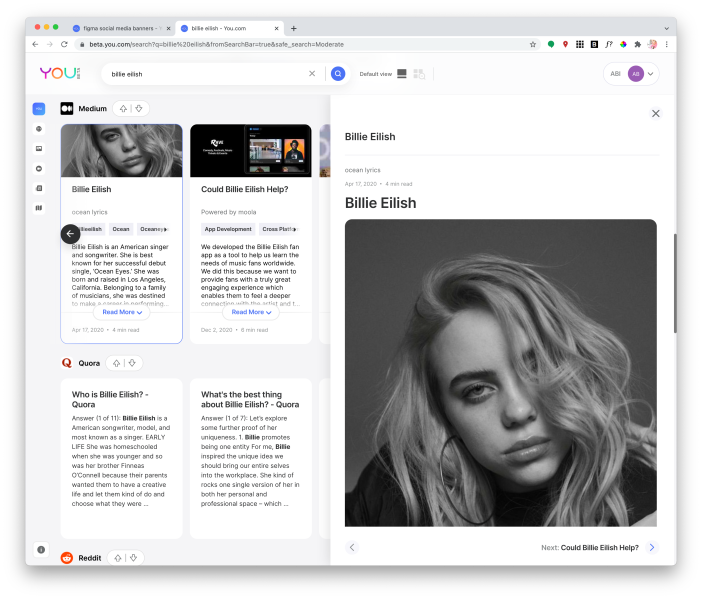 Above: An artist search using You.com.

“Google is a massive databank comprised of everything you’ve ever searched for (even if you deleted it), who you’ve communicated with, the apps and extensions you used. You probably tell your search engine highly personal things that you might not tell your closest friends or family. And it’s not just your search queries — Google follows you around the internet and is even tracking you on partner sites with tracking pixels. All of this data gets saved and later monetized through ad targeting,” Socher continued. “It’s imperative to create a fairer system for people to have agency in their information diet and organizations of all sizes to have a chance at being on the first page of [a] search when their content is relevant.”

Thirty-employee You.com is among a new crop of startups aiming to challenge Google’s dominance in web search. Another is Neeva, launched by two former Google executives, and Mojeek, a U.K.-based company developing web indexing technologies. Subscription-based Neeva licenses its web index from Microsoft’s Bing but promises fewer ads and greater privacy, combining results from a user’s emails and other personal information. Mojeek is building its own index, with the goal of reaching 6 billion pages by the end of 2021. (Google claims to have indexed hundreds of billions to date.)

Google’s share of the global search market has held steady at more than 90% for most of the past decade. Bing trails with 2.9%, followed by Yahoo at 1.5%, according to Statcounter.

While longtime rivals like DuckDuckGo have made slow but steady gains, others, including Berlin-based Ecosia, have struggled to secure a foothold in the ultra-competitive field. Cuil, which was also founded by former Google engineers, raised $33 million in capital and indexed more than 120 billion web pages before shutting down in 2010, after just over two years in operation. 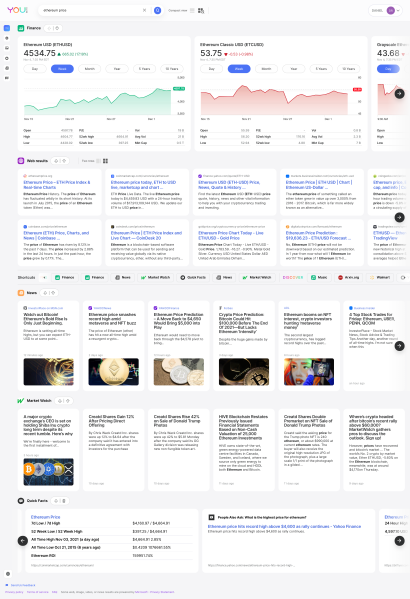 Above: You.com can show the price of commodities like Ethereum and other cryptocurrencies.

Google faces two state-led antitrust lawsuits and a federal case in the U.S. over what critics allege is monopolistic behavior. But so far, regulators’ attempts to open up the search market have been mixed. For instance, a search engine “choice screen” on Android devices sold in the European Union, imposed by the European Commission in 2019, tends to favor companies that are more aggressive in their user monetization, a Stanford study found.

“The pandemic has reinforced the importance of rethinking search and launching You.com. What began 20 years ago as a way to organize and make information universally accessible has morphed into prioritizing the relevance of ads over the relevance of content … There’s long been a blind belief that engagement is more important than helping people get something done and saving them time,” Socher added. “You.com is a trusted platform that creates value for users and builders to innovate and co-create the search economy. We want to democratize information access and choice and allow users to truly personalize their information experience … I think it’s vital that we bring back agency and control and treat users as people instead of products.”