T-Mobile’s mid band 5G is too rare, but fairly fast if you find it 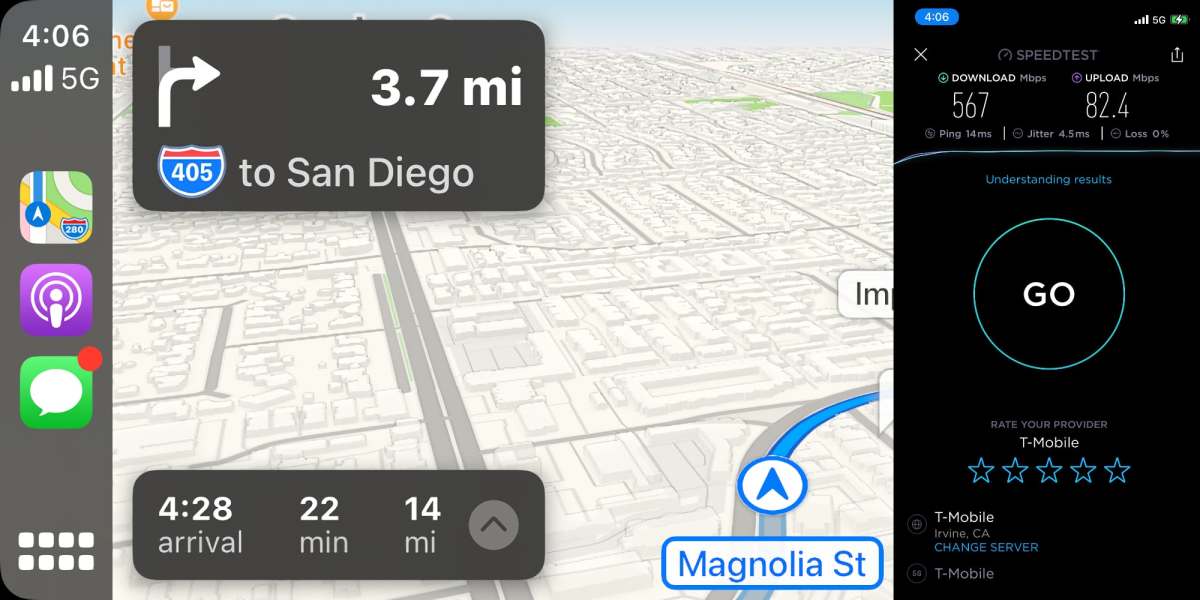 Regardless of whether you’ve been closely following the last two years of 5G cellular rollouts or are just catching up on them, you should know that there are three flavors of 5G connectivity: low band 5G, which is largely similar to 4G in speed but far-reaching; high band 5G, which is up to 100 times faster than 4G but limited in range; and mid band 5G, which compromises on speed and distance. Cellular carriers in Asia, Australia, and Europe have focused largely on mid band 5G, but for a variety of reasons, most United States carriers launched low and high band 5G, leading to highly problematic, whipsaw-like performance.

One U.S. carrier, Sprint, deployed a relatively small but powerful 5G network using mid band 2.5GHz wireless spectrum before being formally acquired by T-Mobile and shutting the network down. This week, T-Mobile said it has redeployed that spectrum in over 400 cities and towns as part of its plan to offer mid band 5G to 100 million people by the end of 2020. If that happens, T-Mobile will be well on the road to the “transformative 5G network” it has promised — not the fastest at peak, but rather one that delivers the best overall experience to the highest number of users. This should enable a large number of businesses and consumers to actually enjoy 5G’s long-touted performance benefits this year.

Having tested Sprint’s 5G network in Los Angeles, California last year, we’ve waited a long time to see how it would perform at the center of T-Mobile’s 5G layer cake. So as soon as T-Mobile announced mid band 5G availability in a nearby city, Garden Grove, we went hunting for the faster signal with a brand new iPhone 12 Pro in hand. Here’s what we found.

In September 2019, T-Mobile blasted larger rival Verizon as “VerHIDEzon” for launching a high band 5G network that offers super high speeds at ranges measured only in city blocks, then “refusing to show customers exactly where their 5G is!” One year later, T-Mobile is facing its own 5G mapping issues.

Our tests of Verizon’s high band “5G UW” have certainly been frustrating: Whether we’ve walked around Providence, Rhode Island or driven through liquor store parking lots outside Disneyland, finding a Verizon 5G signal has been only slightly easier than catching a leprechaun, and though Verizon’s 5G UW maps are sad — individual streets spread across nearly 60 cities, some not actually delivering 5G, in our experience — at least there are maps.

Above: T-Mobile’s current 5G maps don’t differentiate between low and mid band 5G coverage, though they’re fundamentally different in speed and latency, and there are no guides to where mid band 5G service can be found.

Since Sprint’s mid band 5G worked well in its promised parts of Los Angeles, offering clearly differentiated speeds on city streets and stretches of highway, we never would have expected T-Mobile’s implementation to be problematic. But we had a lot of trouble locating and maintaining mid band 5G signals on T-Mobile’s network in Garden Grove. Since T-Mobile’s website doesn’t offer any mid band-specific map, we picked some of the city’s major streets and ran Ookla’s Speedtest repeatedly as we drove around. After an hour of fruitless searching on our own and several hours of waiting, we were ultimately able to get two sets of mid band 5G coordinates directly from T-Mobile.

The coordinates were less than 1,000 feet from one another, and neither location was particularly noteworthy — it wasn’t as if T-Mobile had launched mid band broadly across Orange County’s famed Vietnamese community, Little Saigon. When we asked whether the “Garden Grove” rollout was limited to the tiny area indicated by the map points above, T-Mobile didn’t respond.

During our initial testing on self-selected streets such as Garden Grove Boulevard, Main Street, and Brookhurst, we saw zero evidence of mid band connectivity or speeds. Despite a “5G” badge on the iPhone’s screen, downloads ranged from 3Mbps to 87Mbps, all within 4G range and matching the generally uninspired performance we’ve previously seen with T-Mobile’s low band 5G “blanket.” On average, these low band speeds were in the 40-60Mbps range, but could go higher or lower at any moment. We actually saw higher 5G speeds when we exited Garden Grove, hitting over 140Mbps on the freeway in Santa Ana.

Armed with T-Mobile’s specific coordinates, we saw dramatically better results — in line with what Sprint was delivering in mid-2019. As we approached the two Garden Grove locations, our 5G speeds finally jumped over the 100Mbps mark, surging from 101Mbps to 556Mbps — a 5.5x improvement — within just five minutes as we covered the last mile or two before reaching the first location. Almost all of the mid band speed benefit was within about a mile of that first location: We clocked speeds in the 200, 300, 400, and 500Mbps ranges as we drove around, eventually peaking at 567Mbps directly in front of the suggested testing address.

Just to quantify that speed, we re-ran a test we had conducted with Verizon’s high band 5G in Anaheim, downloading the 1.25GB movie Borat from the iTunes Store. The one hour and 23 minute film took just over two minutes to download in 1080p HD, virtually identical to the transfer time we experienced with a Verizon millimeter wave connection (at 732-828Mbps speeds) earlier this month. We also saw super-responsive sub-15-millisecond latencies on T-Mobile mid band 5G, including multiple 12-14ms pings, and even one at 11ms, roughly one-third to one-half the ping times we’ve recorded with low band 5G.

At the second T-Mobile testing location, we couldn’t get much faster than 400Mbps speeds even when we started walking around the only cellular tower we could spot in the area. Even so, that number was higher than the “around 300Mbps” typical download speed T-Mobile is advertising for mid band 5G, but well below the “up to 1Gbps” peak it’s promising, and our numbers came from specified testing sites — presumably with relatively few people sharing the towers.

Will T-Mobile’s mid band 5G be as sketchy as Verizon’s high band 5G?

While there’s certainly some potential for T-Mobile’s mid band 5G to be as obscure and short-range as Verizon’s high band 5G, we don’t think that’s the case right now, or likely to be so in the future. Having experienced Sprint’s 5G network prior to its shutdown, we’ve seen first hand that this flavor of 5G can indeed work over miles — not just city blocks — and deliver multi-hundred megabit per second download speeds, albeit with less impressive (but still reasonable) upload speeds. We predicted last year that Sprint’s 2019 performance would be akin to “2020’s typical 5G,” and it is — across most of the world’s 5G-adopting countries, just not the United States.

If you can find it, T-Mobile’s mid band 5G comes much closer to delivering on the 5G standard’s transformative promise than anything we’ve yet seen from rival carriers Verizon or AT&T. For now, the problem is precisely in the finding, as we certainly wouldn’t characterize Garden Grove as a “mid-band 5G city” in the way T-Mobile did, and the absence of maps means that users will only stumble upon mid band 5G accidentally rather than enjoying it wherever they go. Your results, of course, may vary based on the cities and towns you live in and visit.

Given T-Mobile’s track record, we’re pretty confident that this will change for the better. Unfortunately, no one really knows when and where, so we’ll have to remain vigilant until true 5G becomes as pervasive as it is powerful.