The Ferroelectric Memory Company (FMC), a startup developing ferroelectric memory technologies, raised $20 million to fund its international expansion to U.S. and Asian markets and accelerate commercialization of its products for AI, internet of things (IoT), edge, and datacenter applications. The company credits “strong interest” from companies for the capital infusion, including “major” semiconductor manufacturers as well as foundries in Europe.

Ferroelectric memory is random-access memory similar in design to existing memory but with a ferroelectric instead of dielectric layer. (Dielectrics are electrical insulators that can be polarized by an applied electric field, while ferroelectrics have a spontaneous polarization that can be reversed.) Ferroelectric memory has disadvantages in its lower storage densities, storage capacity limitations, and higher manufacturing costs, but it requires less power and boasts faster write performance as well as a much greater maximum read/write endurance.

For its memory chips, FMC uses a material called crystalline hafnium oxide (HfO2), which enables them to scale from 65 nanometer manufacturing processes down to 28 nanometers and lower. FMC essentially transforms amorphous HfO2 into crystalline ferroelectric HfO2, enabling standard metal oxide semiconductor (CMOS) transistors and capacitors to be converted into non-volatile memory cells. The company claims that HfO2 reduces system-on-chip cost to around 80% and per-bit write energy by a factor of 1,000 and that it delivers a roughly 70% overall performance gain attributable to advanced node processes.

Intel introduced HfO2 into complementary CMOS manufacturing in 2007, around the time scientists in Dresden, Germany discovered the material could attain ferroelectric properties under very specific conditions. FMC, a spinoff from TU Dresden, began commercializing HfO2-based memory almost a decade later, in 2016, two years prior to emerging from stealth. 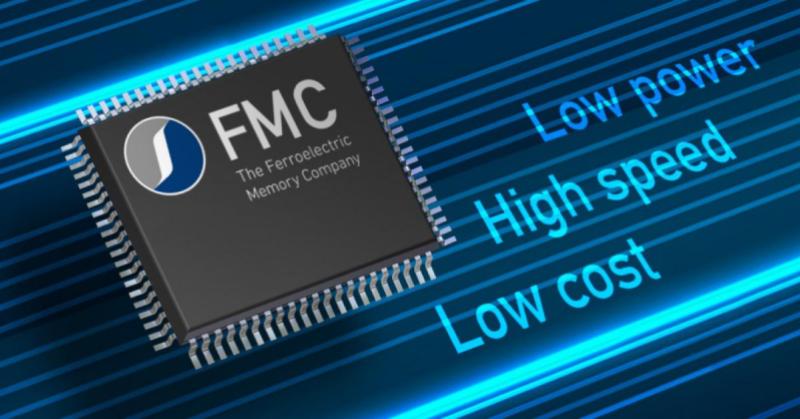 FMC asserts that its ferroelectric field-effect transistor and capacitor technologies offer key performance and strategic advantages over rivals. They’re well-suited to IoT, the company says, due to their low power requirements and comparatively high performance. Besides IoT, ferroelectric memory could be leveraged in medical, aerospace, and automotive applications thanks to its radiation hardness and temperature stability. And because ferroelectrics are tamper-resistant, they could serve electronics that rely heavily on data security, like credit card chips.

FMC partners with manufacturers and fabless companies to incorporate its ferroelectric solution into their fabs and chip designs. Companies dealing with chip design can obtain “hard macro” solutions ready for use in embedded and standalone products.

“Without next-generation memory, the potential of 5G, AI, and IoT will never come to mass market adoption. Current memory technologies face limits to achieve the needed high density, low latency and low power consumption to propel the adoption of these data-intensive applications,” FMC CEO Ali Pourkeramati, who cofounded the company with Menno Mennenga and CTO Stefan Müller, told VentureBeat via email. “FMC’s patented technology makes it possible to integrate FMC’s ferroelectric hafnium oxide memory into a state-of-the-art CMOS logic technology, which will make possible product development for devices that are fast, durable, low power, and need high density non-volatile memory. This new funding will accelerate our commercialization and allow us to enter the U.S. and Asian markets.”