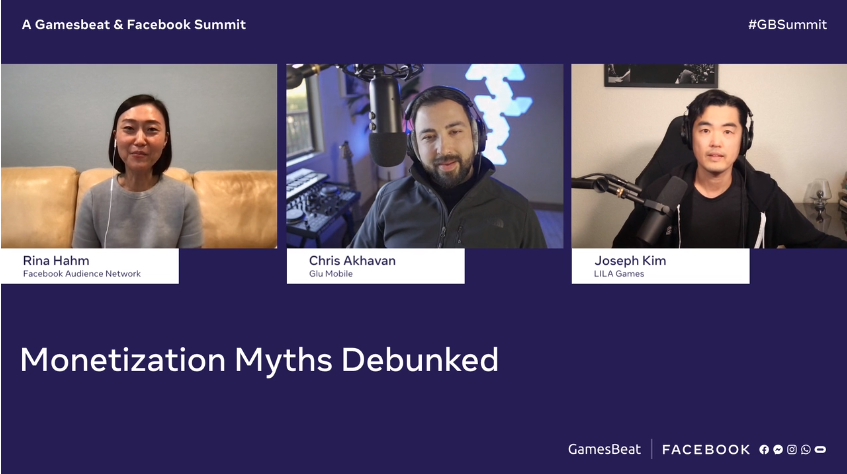 Monetization in free-to-play (F2P) and freemium games is in constant flux as the technology around it changes and evolves to better serve an increasingly sophisticated audience. Some things that developers thought they knew about monetization no longer are true and other things have changed beyond recognition.

In “Common Monetization Myths Debunked,” moderator Rina Hahm, the head of North America West at Facebook Audience Network, spoke with Chris Akhavan, the SVP of business development, corporate development, and advertising at Glu Mobile and Lila Games CEO Joseph Kim about what’s true, what’s not, and why balance is the key during GamesBeat’s Driving Game Growth & Into the Metaverse in partnership with Facebook.

This is both true and not true, according to Kim and Akhavan. Kim’s stance is that it’s “a myth that advertising always cannibalizes IAP, but I think it’s also a myth that it never cannibalizes.” Akhavan agreed and said that he thinks that it “comes down to proper economy balancing.”

Overall, it comes down to “situational context that influences behavior around ads,” as Kim put it.

“Ads are going to perform better in casual games, as opposed to an audience that is time-rich and cash-poor,” Kim said. “I think the tricky part comes when we think about … the value exchange. You have to entice the audience to engage with the ad, so if you’re giving away 0.3 gems in order to watch an ad, then that conversion between what you typically pay on the IAP side versus ads can lead down a path of more inflation. … the value exchange would be through some form of player segmentation. The simple case is trying to serve ads to your non-monetizers and not serving ads to your monetizers.”

Player segmentation is an important facet of balancing in-app advertising and in-app purchases without either segment feeling alienated as a result. Akhavan’s work has been, in part, about finding that balance.

“Back when I joined Glu [Mobile], I think we were doing about $8 million a year in ad revenue, and now we’re doing $60 million a year,” Akhavan said. “In order to do that, we’ve had to figure out how to add ads to the mix in a way that is not going to cannibalize IAP. Our approach is very tailored to each game and we very much rely on opt-in and largely rewarded formats that add value to the user’s experience. In order to avoid cannibalization, I think it’s important that you balance your in-app economy.

“When you do that in the right way, I think ads can be a very powerful, very additive revenue stream that users really enjoy and demand. In fact, any time our games have not had rewarded ads, users actually tend to get upset. If you balance ads the right way, you can actually get good participation and lift out of your spenders.”

With the knowledge that players will have a tendency to get upset if they’re not treated equitably — both the spenders and non-spenders — developers need to be careful in how they approach this hybrid monetization model. As in, don’t irritate your people to the point that they walk away entirely.

“Most players are going to be pretty reasonable, meaning if you deliver a very high-quality gameplay experience, most players are going to expect to have to pay or to watch an ad of some kind,” Kim noted. “Then the balance becomes trying to understand … the optimal flow in terms of the ads that are being served to that player that’s fair for the experience that you deliver.”

“When we’re talking about more system-initiated ads — banners, interstitials, ads that are kind of forced upon the player — then … there is going to be a bit of a trade-off where you’re exchanging retention for monetization,” Kim said. “[Now with] user-initiated ads, those are the ads that players are gonna want, and will probably ask developers to integrate, because those are relatively lucrative, opt-in, and not irritating. You can actually expect higher retention over time.”

Myth: In-app advertising is too difficult to implement and bogs down the app

Implementing robust, efficient ad-tech into a game is a “straightforward” process, but it’s made much worse by SDKs that don’t meet player (and developer) expectations in terms of the quality of the ads and the quality of the SDK itself.

Akhavan recommends staying away from any partners that don’t have a great reputation or aren’t considered “big” in order to ensure that quality will be baked into the ad-tech from the beginning. Otherwise, developers run the risk of including bad ads and bad tech, which may crash their game and drive people away.

“For the most part, developers can mitigate this by being selective around who they work with and making sure that you’re working with high quality partners where SDK stability is not going to be an issue,” Akhavan recommended. “… [work] with the select few, very big players out there. And then, over time, maybe add to your stack as you’re capable of supporting, but be prepared to have the right QA cycles as you expand that partner mix. Also make sure that you have kill switches in your game if there is a problem.”

To mitigate any issues with “quality of creative” from ad-partners, developers need to be mindful that their ad-partners don’t use dark UX patterns (dicey user experience and user interface that do things like remove close buttons) and steer clear of offensive content.

As the industry moves more and more towards app bidding and real-time auctions, Kim anticipates that “the trend is for that operational overhead to [lessen] and [to become] more efficient.”

AppLovin defines in-app bidding as, “an advanced advertising method where mobile publishers are able to sell their ad inventory in an auction so that all of their advertisers are simultaneously bidding against one another. As a result of the dense competition, the price (CPMs) earned by the publisher is much higher than it would be otherwise.”

Akhavan was initially skeptical of real-time bidding, as Glu Mobile had become quite proficient in manually managing and optimizing their ad waterfalls. As an early adopter and alpha partner for Facebook and MoPub (among others), Glu “didn’t see much of a lift in terms of performance.” At first.

“Certainly over time, and especially last year, we saw a very material improvement in CPMs,” Akhavan said. “The move to real-time bidding is really maturing and platforms have really refined their bidding pipes. What that has done for us operationally is taken that load down and instead, we can do the things that Joseph was speaking to, like being more thoughtful around how we’re segmenting and displaying ads within our games. [This] is much more impactful work and more strategic for us, as well.”

Hahm reminded us that “there isn’t a silver bullet solution in balancing ads and IAP” and to instead focus on “understanding your player experience” and “balancing your in-app economy.” Testing is key, as well. Some things will work better than others, especially depending on geography and the game’s genre, and all developers can do is ensure that they’re nimble.

A new GamesBeat event is around the corner! Learn more about what comes next.  Nintendo has announced that it will broadcast a new Direct presentation...
Read more
PC News

With over 30 years of industry experience, the former Global Head of Licensing at Servier Group will spearhead LabGenius’ business development, commercial strategy, and...
Read more