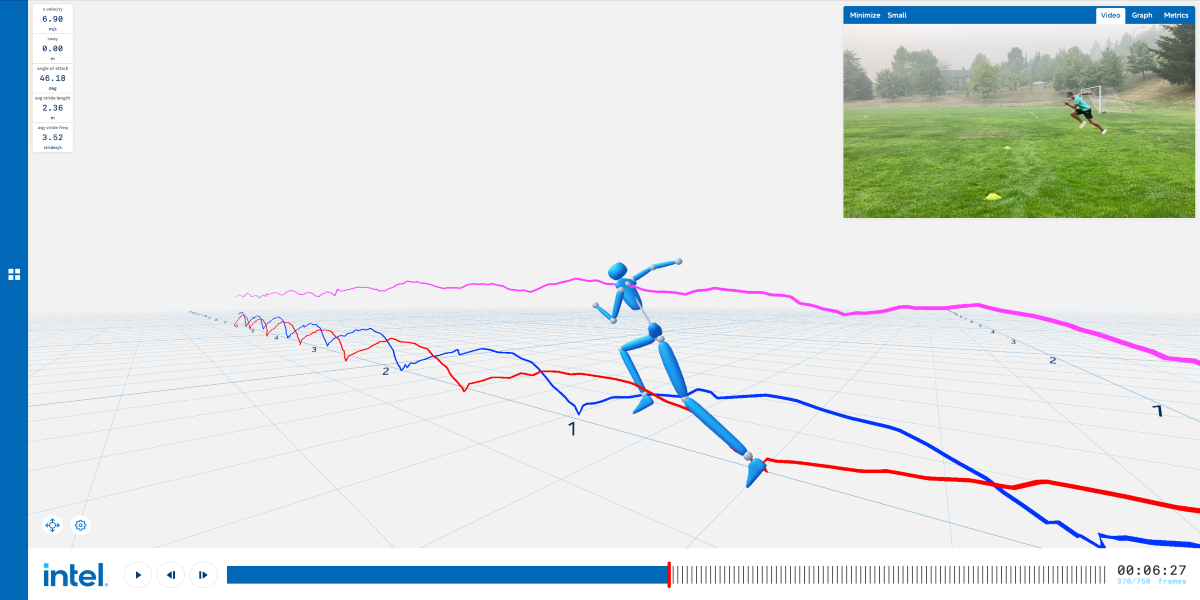 Intel today revealed that its 3D Athlete Tracking (3DAT) technology is being employed by Exos, a firm that focuses on human performance conditioning, to help train professional athletes aspiring to join the National Football League (NFL) and other organizations.

Intel’s 3DAT technology captures skeletal data when an athlete is sprinting, using a video camera running at 60 frames per second. That data is then analyzed using Intel Deep Learning Boost AI capabilities that have been built into the latest generation of Intel Xeon Scalable processors Intel has deployed in a cloud it manages.

The goal is to make it simpler for coaches and athletes to understand how different types of skeletal structures may give one athlete an edge over another, said Ashton Eaton, two-time Olympic gold medalist in the decathlon and a product development engineer in Intel’s Olympic Technology Group.

“We don’t know why people won or lost,” Eaton said. “There are a lot of unknowns.”

Armed with fresh insight, it may become possible to optimize conditioning regimens based on how the skeleton of a specific athlete is constructed, Eaton noted. Insights about velocity, acceleration, and biomechanics are all surfaced in reports shared with coaches and athletes. That data can be critical because the difference between who wins a race, for example, comes down to a tenth of a second, Eaton noted.

The most compelling thing about this approach from an athlete’s perspective is that it doesn’t require them to attach sensors to their bodies. All the data is captured using a handheld camera that can be used indoors or out.

Players can also benefit, as that data is employed to either prevent injuries or help them recover faster. Many fractures, for example, occur as the result of repeated stress on a specific bone, something that could potentially be identified earlier and prevented.

As useful as the insights being generated by Intel AI might be, however, there are a lot of other factors that impact the performance of an athlete on any given day. The 3D Athlete Tracking (3DAT) technology only captures skeletal data. The AI technology required to capture how the muscles interact with the rest of the body has not yet been created, Eaton noted. It has also been shown that everything from emotional state to the amount of sleep an athlete gets can affect performance.

Athletes shouldn’t necessarily obsess over the skeletal metrics being collected, Eaton said. Rather, it’s one data point they can employ to maximize their potential.

Nevertheless, it’s clear AI will play an increasingly significant role in sports training at both the professional and amateur levels. The challenge is figuring out how to achieve that goal in the least intrusive way possible.

In the meantime, it’s not likely AI will allow anyone to predict who will win on any given day. That capability would probably lead to the end of sports as we know it and eventually the demise of a multi-billion dollar betting industry. But the data used to generate the odds that casinos and other betting parlors lay down might soon be influenced by algorithms built into AI models.