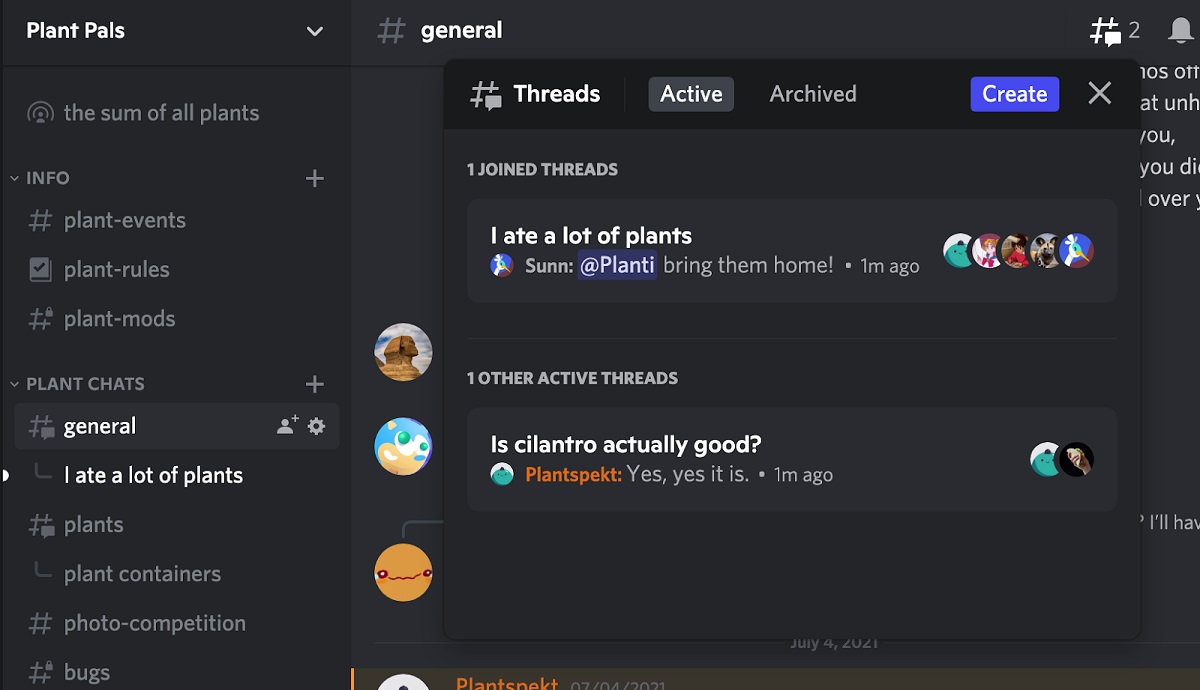 Discord conversations can often get into the hundreds of messages, and to simplify that chatter, the company is launching “threads.”

And as simple as that sounds, it took more than a year for the company to bone up on the subject, consult with the most active of its 150 million monthly active users, and craft the solution. This is according to Cherry Park, the director of product marketing at Discord, in an interview with GamesBeat.

“It’s definitely work that we’re willing to do,” Cherry Park said. “We’re constantly building high-quality features for our users. And threads is one that has been requested almost every month in our support center. And even though it’s a labor of love on our part, we want to make sure it’s easy, right for users, and that it’s helpful.”

She said that it hasn’t always been easy to catch up with the latest conversation within a channel. And it is easy to have conversations turn into rabbit holes full of debates, tangents, and off-topic chats. These side chats were never searchable, and so it wasn’t easy to figure out which epic conversations you should join.

But the new threads are searchable, and you can modify the subject for them as you wish. And since Discord has now spread well beyond games because of its popularity in the pandemic, there are many more subjects for conversations than there used to be. Threads can help in this respect, as it channels conversations into the places where they belong. And the channels stay more organized.

“Everything about our mission is around creating space and helping people find that belonging,” Cherry Park said.

Above: Discord threads in action.

Discord always wants people to come and hang out. But it also wants to help communities stay engaged while avoiding having to shut down conversation to maintain organization. Last fall, the company introduced “replies,” which enable anyone to specify a message they want to respond to in a busy channel. This way, someone doesn’t have to say out another person’s name two days later and hope that person remembers what they were talking about.

This was a good step, but a problem emerged. Keeping up with the back-and-forth can get overwhelming, especially when there are hundreds of messages, said Discord’s Shawn Park.

A thread is a quick way to branch a conversation off of a channel’s main feed without removing it from the channel itself, in Discord’s interpretation of the popular chat feature. When someone posts a thread, every response after the first post appears in a separate feed which allows everyone in the Thread to discuss a topic in more detail without interrupting the main conversation.

After a certain period of inactivity (24 hours by default), Discord automatically archives the thread, clearing away the clutter for everyone visiting the channel. The active threads stay alive as people contribute to them.

All this happens while the channel’s normal flow of conversation continues. It’s a way to follow along with an unexpectedly popular topic without dominating the flow of conversation, whether you’re on a server with just your closest friends or hundreds of people trying to talk at once, Discord said.

For example, if someone in a #football channel starts talking about rugby, community members with thoughts on rugby can quickly take that conversation to a thread within the same channel, getting their rugby thoughts off their chest without talking over everyone else. Once the rugby chat dies down, the thread auto-archives. This all happens without interrupting the football talk, either with rugby talk or with spirited arguments about which channel the rugby talk belongs in.

“With threads, it’s really important that they’re discoverable and traceable, so that you don’t miss out on a topic that might be coming up,” Cherry Park said. “A lot of our servers in the past were gaming. But as we’ve grown, we’ve seen so many more users using it for non-gaming purposes, which means that there are a lot more topics happening. You might have a gaming server where people are talking about crypto and finance, or the latest news. Threads let you start a new topic within a channel itself, give it a name, and allow others to join in.” 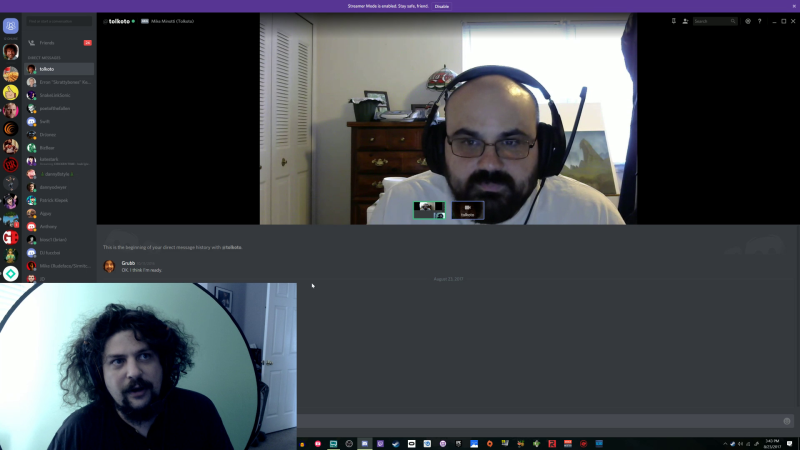 Above: You can also use Discord to make video calls.

Any message posted in a Discord server can be the start of a big conversation, and any message can give birth to a thread. To start a thread from an existing message, users can simply hover over it and choose the new “#” button. They can also create a thread from scratch by pressing the “+” button in the chat bar and selecting the “create thread” option.

When you open a thread from within the channel’s chat log, it will pop up into a split-view panel on the right rather than pulling you away from the current channel. However, active threads will also appear in the Channel List, and clicking one there will bring you to a fullscreen version. It’s the difference between focusing on a thread as a sidebar to an ongoing conversation and coming into it with your full attention.

For servers at Level 2 and up, you can create private threads, which don’t appear within a server’s channel listing or threads directory — they’ll only appear for someone if they’re added manually, or are @mentioned within the thread itself.

Private threads are a great way to keep side chats tidy in larger community servers.

In addition, Tier 2 Boosted servers can increase how long a thread stays active until it’s auto-archived, up to one week instead of 24 hours. But of course, an archived thread doesn’t have its chat deleted — it just means the thread will be placed in the archived tab. You can always open it up again, read through it, and start the same thread again by writing in a new message.

“We can see value out of this for larger communities for their conversations which are happening at full speed,” Shawn Park said. “You can pick the conversation up in a smaller channel.”

At the moment, threads apply to text conversations, not those with video or audio. 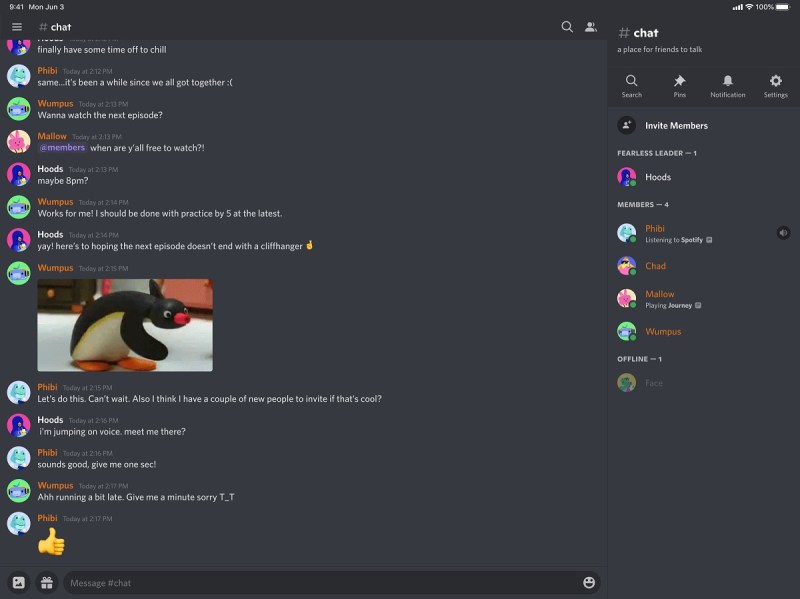 Above: Discord has 19 million servers.

Since threads are a new surface to consider when moderating servers, Discord wanted to give communities the opportunity to choose where and how they can be used. Not every community will want every member to be able to create a thread. Unruly people can be removed from threads. And so threads have new permissions which members can fine tune.

Threads are rolling out starting today for Windows, macOS, Linux, iOS, Android, and the web app. Servers that have the “community” feature set enabled will be able to opt-in to threads early.

All servers, including those that have not enabled “community,” will have threads automatically enabled beginning August 17. Discord will figure out soon if its year’s work of effort paid off.

“We did a very extensive rollout, where we had testers, we had QA, we had multiple rounds of interviews,” Shawn Park said. “But at the end of the day, when we roll out, it’s always magical to see how users take it to the next level.”

According to a recent survey from technology intelligence platform Snow Software, 68% of IT leaders have a hybrid cloud strategy, implying that it comprises...
Read more