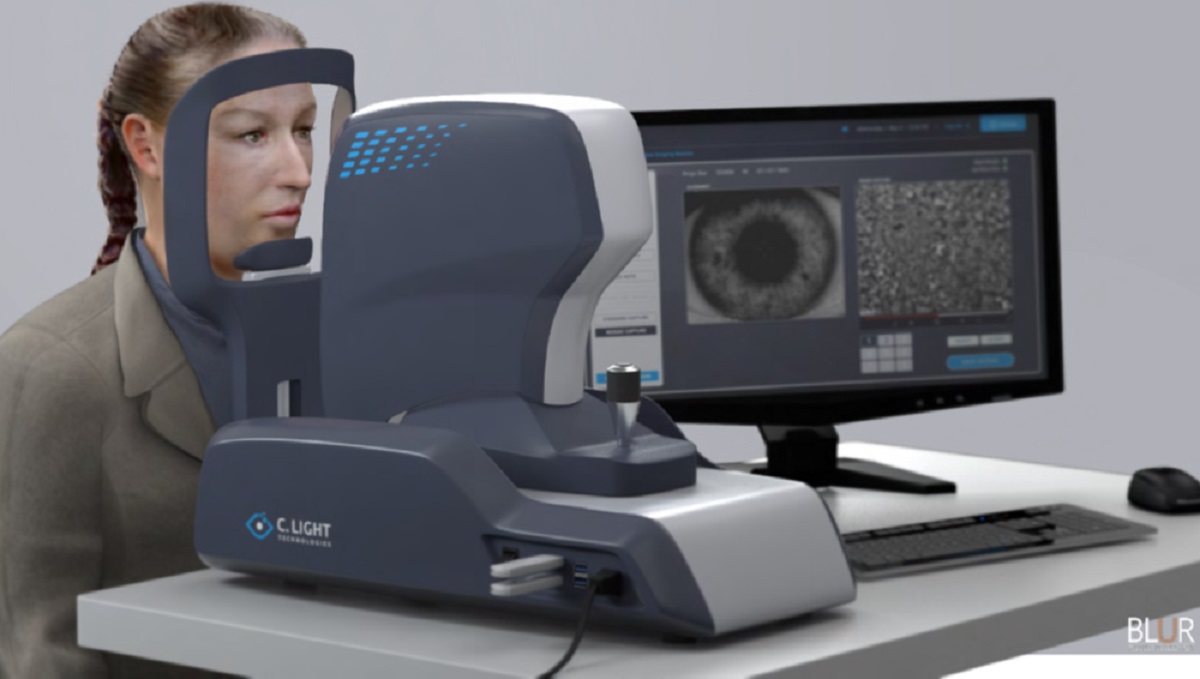 C. Light Technologies has raised an investment from the Alzheimer’s Drug Discovery Foundation (ADDF) for its AI technology that spots changes in eye motion to detect the earliest stage of Alzheimer’s disease.

The company received this investment via ADDF’s Diagnostics Accelerator, a collaborative research initiative supported by Leonard A. Lauder, Bill Gates, the Dolby family, the Charles and Helen Schwab Foundation, Jeff Bezos, and MacKenzie Scott, among others. C. Light recently completed its second and final seed round, raising $500,000, including the ADDF investment, which brings its total seed funding to more than $3 million.

This new investment will fund a novel pilot study with the University of California at San Francisco Memory and Aging Center to look at changes in fixational eye motion during the earliest stage of Alzheimer’s disease, generally known as mild cognitive impairment.

The ADDF’s Diagnostics Accelerator has made previous investments in more than two dozen world-class research programs to explore blood, ocular, and genetic biomarkers, as well as technology-based biomarkers to identify the early, subtle changes that happen in people with Alzheimer’s.

The goal is to try to get something into the market by 2023. 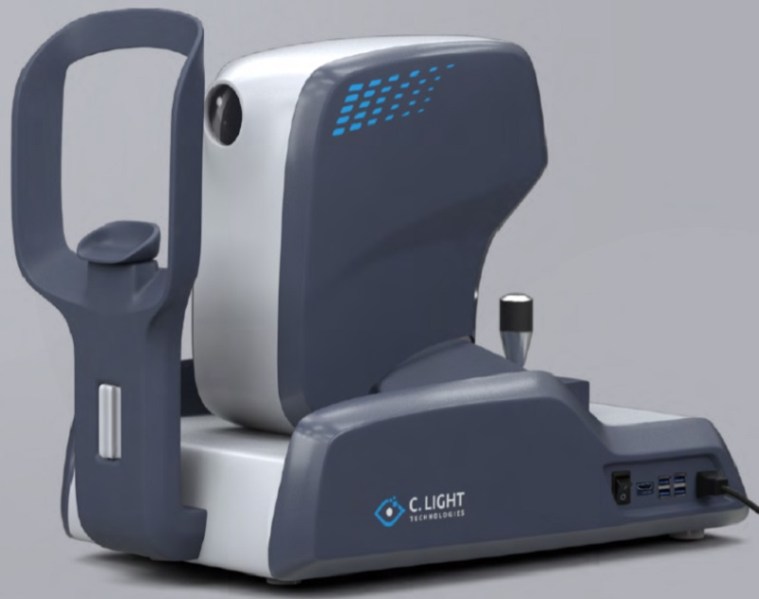 Above: This machine detects small eye movements to diagnose Alzheimer’s.

As new therapeutics for Alzheimer’s are introduced to the clinic, this UCSF technology has the potential to provide clinicians with a better method to measure disease progression, and ultimately therapeutic efficacy, using C. Light’s novel retinal motion technology.

The current lack of objective tools to assess neurological progression and disability highly impacts pharmaceutical developers. Therapeutic development for the central nervous system is extremely difficult, with success rates of only 8% going from conception to market. Clinical trials can take a decade to come to fruition in this space, due to inefficient methodologies for assessing the efficacy of drugs. This is where C. Light could make the biggest impact.

C. Light cofounder Christy Sheehy said in an interview with VentureBeat that the company hopes to get a diagnosis machine into the market.

Sheehy started the company after doing a lot of research for her doctorate at the University of California at Berkeley.

“I had really started to think of the power of using AI motion, and retinal imaging, as biomarkers. And so I have family members that have, unfortunately died from neurodegenerative disease. And so for me, this is a personal passion area as well to be able to make sure that for other families, I can extend longevity and quality of life for loved ones,” Sheehy said.

While C. Light is looking for automating the diagnosis, current methods are a lot more labor intensive, as doctors and other specialists have to evaluate patients with manual testing. Sheehy hopes to build a $15,000 machine that can be used at the offices of the specialists.

Before this year it had been almost two decades since an Alzheimer’s drug was brought to market. Part of the reason for the slow progress is that drug developers haven’t had viable biomarkers they can use to effectively stratify patients and track disease on a fine scale. The ADDF’s investment will enable C. Light to tackle that. 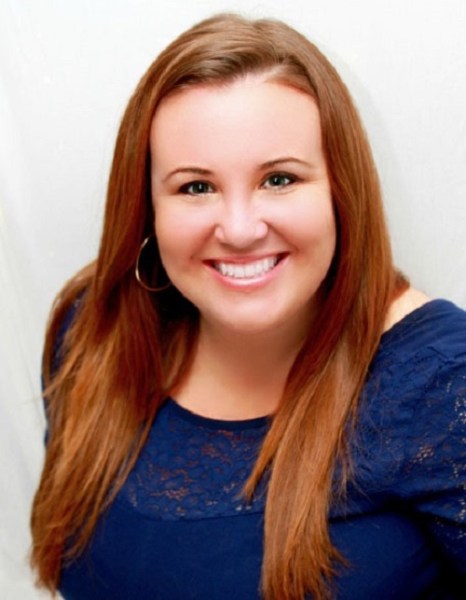 Above: Christy Sheehy is cofounder of C. Light Technologies.

Eye motion has been used for decades to quickly triage brain health, which is why a doctor asks you to “follow my finger” with your eyes. In more than 30 years of research, studies have revealed that patients with Alzheimer’s exhibit eye movements that are affected by the disease, though these movements have only been measured on a larger scale to date.

Sheehy said that AI’s advances are just now coming into the technology for diagnosing Alzheimer’s. There are other companies using AI for retinal diagnosis for diabetes, but it is new in the Alzheimer’s and neuro degenerative space.

In the past, C. Light has done studies on multiple sclerosis and concussion scanning via retina analysis. But the new study will focus on mild cognitive impairment as a possible early sign of Alzheimer’s. Dementia affects a larger body of people, but C. Light’s focus for now is on detecting Alzheimer’s, which is often fatal.

“Using eye motion is a super powerful tool. So it involves many areas of the brain,” said Sheehy. “A lot of different areas of the brain are interrelated while we move our eyes. So where you’re doing eye motion tracking, and you have an individual execute a motor task or be able to memorize or look at how to draw a clock — all of those can be potentially used as, as biomarkers. And so one of the things that we’re trying to tackle with our device is look for small movements down to about a micron in size.”

C. Light’s research takes the eye movement tests to the microscopic level for quicker and earlier assessments. The company says its fast, non-invasive, and objective technology enables clinicians to study and measure eye motion on the cellular scale — meaning eye motion as small as 1/100th the size of a human hair — helping physicians better monitor a patient’s disease and treat it more effectively.

C. Light said its tests are also easy for clinicians to administer. Patients put their chin in a chinrest and then focus on a target for 10 seconds. The test does not require eye dilation, and patients are permitted to blink during the test. A very low-level laser light is shown through the pupil and reflects off the patient’s retina, while a sensitive camera records the cellular-level motion in a high-resolution video. This eye motion is then extracted up to 1000 times per second and fed into C. Light’s advanced analytical platform.

Sheehy said C. Light is creating an entirely new data stream around the status of brain health via the eye. She said the company’s growing databases and accompanying AI can change the way we monitor and treat neurological disease for future generations.

Howard Fillit, a doctor and founding executive director at the ADDF, said in a statement that more than 6 million people in the U.S. are affected by Alzheimer’s. Technology can now collect data from patients in many ways, and AI can find patterns to detect early signs of dementia. C. Light’s retinal measurement solution, along with the UCSF study, will help clinicians identify deficits and may allow for early intervention and quicker therapeutic intervention, he said.

The machines capture eye movements for roughly 10 seconds. The tech extracts the data for the movement, which can be up to 1,000 times per second, for about 5,000 total data points. C. Light feeds that into a neural net that allows for the diagnosis of the different visual signatures that would be indicators of disease. The data can be sent to the cloud, where many machines could access it. Over time, the AI would get better.