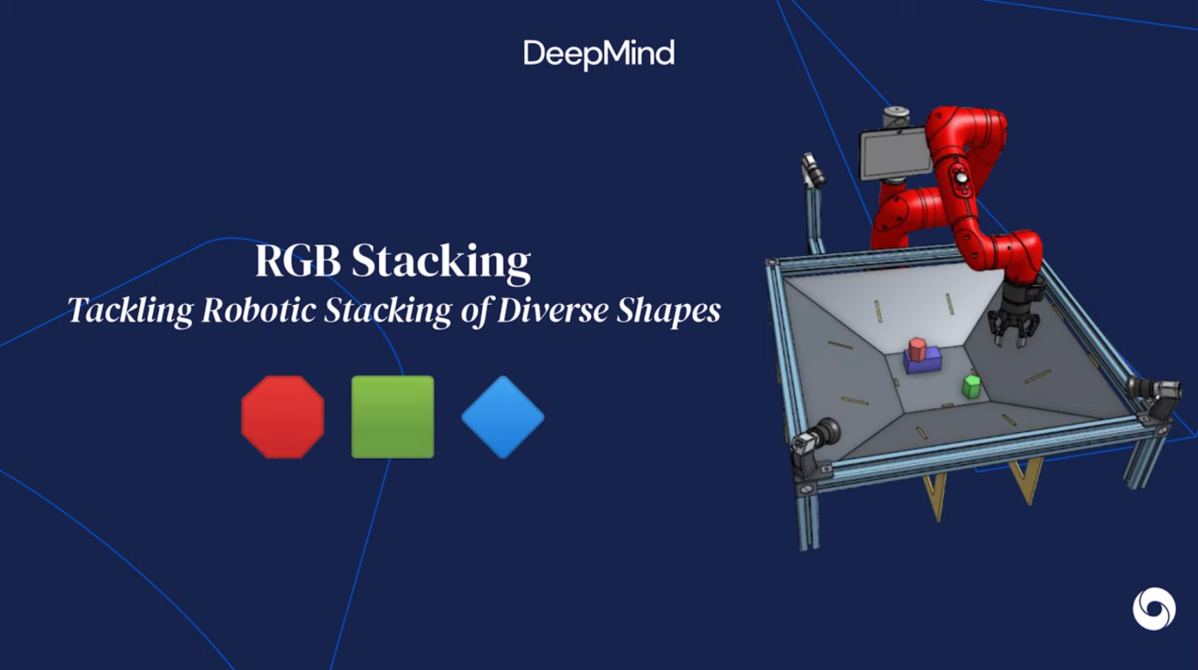 Stacking an object on top of another object is a straightforward task for most people. But even the most complex robots struggle to handle more than one such task at a time. That’s because stacking requires a range of different motor, perception, and analytics skills, including the ability to interact with different kinds of objects. The level of sophistication involved has elevated the task to a “grand challenge” in robotics and spawned a cottage industry dedicated to developing new techniques and approaches.

A team of researchers at DeepMind believe that advancing the state of the art in robotic stacking will require a new benchmark. In a paper to be presented at the Conference on Robot Learning (CoRL 2021), they introduce RGB-Stacking, which tasks a robot with learning how to grasp different objects and balance them on top of one another. While benchmarks for stacking tasks already exist in the literature, the researchers assert that what sets their research apart is the diversity of objects used and the evaluations performed to validate their’ findings. The results demonstrate that a combination of simulation and real-world data can be used to learn “multi-object manipulation,” suggesting a strong baseline for the problem of generalizing to novel objects, the researchers wrote in the paper.

“To support other researchers, we’re open-sourcing a version of our simulated environment, and releasing the designs for building our real-robot RGB-stacking environment, along with the RGB-object models and information for 3D printing them,” the researchers said. “We are also open-sourcing a collection of libraries and tools used in our robotics research more broadly.”

With RGB-Stacking, the goal is to train a robotic arm via reinforcement learning to stack objects of different shapes. Reinforcement learning is a type of machine learning technique that enables a system — in this case a robot — to learn by trial and error using feedback from its own actions and experiences.

RGB-Stacking places a gripper attached to a robot arm above a basket, and three objects in the basket: one red, one green, and one blue (hence the name RGB). The task is simple. A robot must stack the red object on top of the blue object within 20 seconds, while the green object serves as an obstacle and distraction.

According to the DeepMind researchers, the learning process ensures that a robot acquires generalized skills through training on multiple object sets. RGB-Stacking intentionally varies the grasp and stack qualities that define how a robot can grasp and stack each object, which forces the robot to exhibit behaviours that go beyond a simple pick-and-place strategy.

“Our RGB-Stacking benchmark includes two task versions with different levels of difficulty,” the researchers explain. “In ‘Skill Mastery,’ our goal is to train a single agent that’s skilled in stacking a predefined set of five triplets. In ‘Skill Generalization,’ we use the same triplets for evaluation, but train the agent on a large set of training objects — totalling more than a million possible triplets. To test for generalization, these training objects exclude the family of objects from which the test triplets were chosen. In both versions, we decouple our learning pipeline into three stages.”

The researchers claim that their methods in RGB-Stacking results in “surprising” stacking strategies and “mastery” of stacking a subset of objects. Still, they concede that they only scratch the surface of what’s possible and that the generalization challenge “remains not fully solved.”

“As researchers keep working to solve the open challenge of true generalisation in robotics, we hope this new benchmark, along with the environment, designs, and tools we have released, contribute to new ideas and methods that can make manipulation even easier and robots more capable,” the researchers continued.

As robots become more adept at stacking and grasping objects, some experts believe that this type of automation could drive the next U.S. manufacturing boom. In a recent study from Google Cloud and The Harris Poll, two-thirds of manufacturers said that their use AI in their day-to-day operations is increasing, with 74% claiming that they align with the changing work landscape. Companies in manufacturing expect efficiency gains over the next five years attributable to digital transformations. McKinsey’s research with the World Economic Forum puts the value creation potential of manufacturers implementing “Industry 4.0” — the automation of traditional industrial practices — at $3.7 trillion in 2025.

Join gaming leaders online at GamesBeat Summit Next this upcoming November 9-10. Learn more about what comes next.  IoT product provider Zyter has partnered with...
Read more